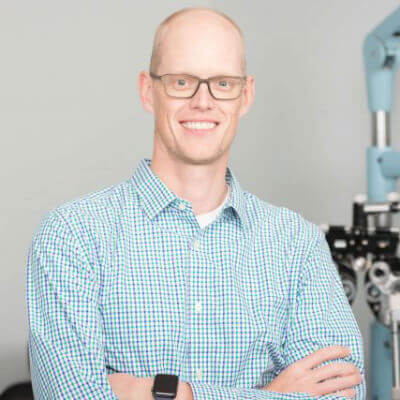 A Winnipeg native, Dr. Luke Small graduated from the University of California Berkeley School of Optometry in 2000. Dr. Small received both a bachelors degree in Vision Science and his Doctorate of Optometry (OD) from Berkeley. Dr. Small’s clinical internships included studying at the Beijing Medical University in China, the Vandenberg Air Force Base in California, and at LaserVue Eye Associates in Orlando, Florida.

Upon graduation from Berkeley, he and his wife (Dr. Gina Mistretta Small, OD) returned to Canada for two years where they practiced at Armstrong and Small Eyecare Centre with Dr. Rod Small until 2002.

For the next five years, Dr. Small and his family moved to his wife’s hometown of Santa Barbara, California. While in Santa Barbara, Dr. Small served as the president of the Tri-County Optometric Association (a chapter of the California Optometric Association) and gained valuable experience working in numerous different modes of optometric practices including private, corporate, refractive surgery and hospital-based optometry.

Dr. Small’s earlier education saw him graduating from the French Immersion program at College Jeanne Sauvé in 1991 where he was valedictorian. Dr. Small received his BS in Environmental Science from Texas Christian University in 1995 where he had received a four-year swimming scholarship in Fort Worth, Texas.

It was in 2007 that he and his wife made the decision to come back to Winnipeg and take over his father’s practice and continue the nearly 100 years of optometric service that Armstrong and Small Eye Care Center has provided to the Winnipeg community. Dr. Small is a third generation optometrist. Between he and his wife, they have 11 family members who are all optometrists.

Dr. Small has also been closely involved with the Volunteer Optometric Services to Humanity (VOSH) who bring glasses and eye care to those in need around the world. To date, Dr. Small has been involved with trips to Peru, Philippines, Ukraine, and Baja Mexico.

In 2012, Dr. Small was voted ‘Optometrist of the Year’ by his fellow Manitoba Optometrists for his volunteer work with Canadian National Institute for the Blind (CNIB), Siloam Mission, and the Manitoba Association of Optometrists (MAO). At the CNIB, he is on the provincial board and has recently been added to the national Programs & Services Committee as well as chairing the same committee at the provincial level. At Siloam Mission, he was an integral part of creating an Optometric clinic within the Saul Sair Health Centre, the first of its kind ever in a homeless shelter. Within the MAO, Dr. Small is on the Public Relations and Communications committee as well as the provincial liaison to the CNIB. Currently Dr. Small is a member of the Optomize and Jump Start Faculty, a group of dry eye specialists from across Canada who are working with Allergan to train other optometrists on how to treat and manage dry eye.

Dr. Small currently enjoys surfing (which is particularly difficult to accomplish in Winnipeg), adventure racing, soccer and his first love, hockey (his sister, Sami Jo, is a 3-time Olympian with the Canadian National Women’s Team) and spending time with his kids. He and Dr. Gina Small have two children, Annika and Sebastian.

Eyes in the Village